Flipping is ruining everything

This weekend, Disneyland and Walt Disney World will welcome Star Wars fans for "Force Friday," the latest big merchandise event at the parks. If you can't make it to Anaheim or Orlando, don't worry. Pretty much everything offered for sale at the event will be available for purchase on eBay by the end of the day.

Theme park fans know the drill by now. Whether it's Tiki mugs at Trader Sam's bar, Beauty and the Beast rose-adorned beverage cups, or the latest collectible pin, fans can expect long lines as people queue to buy whatever limited-edition thing Disney is selling. But more and more often, the people who are lining up to buy this stuff are not fans who want to get their hands on something that gives them bragging rights. They are opportunists looking to make a quick buck by flipping the souvenirs online.

That's frustrating for fans who have to wait in ever-growing lines for the souvenirs they want... or worse, can't get them at all when flippers ahead of them in line buy up all the merchandise. That forces true fans to have to log onto eBay and pay inflated prices for an item that could have been theirs had the park enforced purchase limits.

It's a classic bubble. High resale prices for souvenirs inspires hype, which lures more people into flipping, which reduces availability for core fans, which drives them into an escalating secondary market. Lather, rinse, repeat.

This isn't exclusive to theme parks, of course. I see pop-up stores around the Los Angeles area all the time, which seem to exist for the sole purpose of stocking kids and young adults who immediately resell the hyped-up "luxury" merchandise online. And why wouldn't they? My son made more money flipping one Supreme T-shirt than my daughter made in an entire week working at a local sandwich shop last summer.

And that's a problem. You see, despite the windfall he made, my son flipped only that one shirt. That's because one shirt was all he could afford to buy, in case the flip went south and he lost his money. Flipping is a rich person's game. When you are working paycheck to paycheck, you can't afford to gamble on a box full of $200 T-shirts, no matter how hot the market might appear.

So the people who have money to gamble make more and more flipping — with almost no effort — while those who do not work harder and harder at real jobs, only to fall further and further behind the flippers.

Perhaps you have read about America's housing shortage. Don't believe a word of it. I walk about seven miles a day in neighborhoods around my home, through Pasadena and San Marino, Calif. These supposedly are hot housing markets, with extremely limited availability. And yet I pass literally dozens of empty houses on every walk, some of which I have seen empty for years. Entire condo and apartment complexes stand nearly vacant in the "tight" Southern California market.

"For sale" show up on some of these homes from time to time, but new families almost never move in. Instead, the prices are bid up by flippers flipping to other flippers. The housing markets in many Americans communities is now little more than another investment scheme, and no longer provide a way for someone to find a place to live.

Thanks to flipping, median home prices again are rising faster than wages and the natural demand for places to live. Here's how the market was back in 2015... and housing prices have risen sharply since then. Has your paycheck? 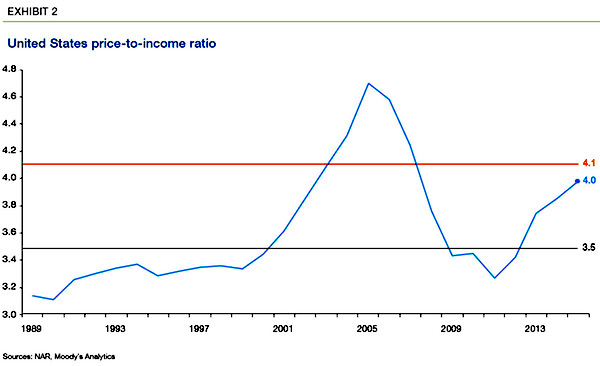 Flipping has driven up home prices to the point in many communities where older resident homeowners now are sitting on enormous equity — allowing them to live off home equity lines of credit without actually having to work for a living. But that's only true for people who had the money to buy a home a generation ago, before America's housing bubbles inflated.

As I wrote before, flipping is a game for the wealthy, but in the housing market flipping also has provided a win for older Americans who bought their homes a generation ago. Rapidly rising housing prices rob the future to pay for the past, as they make it harder and harder — if not impossible — for young people to buy housing so that older homeowners can enjoy rising wealth without additional work.

Unless, of course, those young people take the risk of going deeper into debt — on top of the tens of thousands of dollars they typically owe in student loans — so they can start flipping houses themselves, further inflating the bubble.

As I said: Lather, rinse, repeat.

But we just don't talk much about the way that flipping is ripping our country in half — dividing the wealthy flippers from the actual workers in America. That's because we're not just flipping T-shirts, souvenirs, and houses in America. We're flipping the news, too.

Here's where my experience as a news publisher for the past two decades comes into play. But I'm betting you have seen this happening as a reader, as well. The Internet blew up local newspaper monopolies in the 1990s, but in recent years, Facebook and Google have emerged as even more powerful gatekeepers of the news.

In both cases, those companies' algorithms for deciding what pages to show you on your timeline or in search results factor heavily the popularity of those pages and their topic. Facebook and Google want to show you stuff they think you want to see, and what better way to guess than than by considering what people like you are already clicking?

This creates an enormous incentive for publishers to deliver pages and video that can ride these viral trends. So why invest in expensive original reporting talking about something that's not already on people's radar, when you can copy and paste someone else's popular story and watch it surge ahead with Facebook and Google referrals?

You see it when sites such as Buzzfeed creates lists from popular responses on /r/all threads on Reddit. Programmers have created bots to find and scrape content from popular webpages, copy and paste it into pages on their own site, then use armies of fake social media accounts to drive traffic to their copy of the story. Even traditional publishers now employ people whose job it is to watch their website analytics and quickly paste together stories about hot topics driving traffic.

I have seen this happen on our own websites. My wife can put up richly detailed, thoughtful, original, one-on-one interviews with world-class violinists and they won't get a tenth of the traffic of a story where she basically links to the latest viral outrage over an airline refusing a musician to carry his or her violin on a flight. I gave up tracking injury accidents on theme park rides because I didn't want to attract a community of readers interested only in viral stories of carnage.

Both my wife and I now see posts about viral stories as the thing we need to do to pay the bills so that we can write the original stories and analysis that we want to do. But many publishers don't bother with the second part. They're happy to cash in with nothing but viral stories.

Again, this plays to the interests of the rich and the established because having an established audience — or the means to buy links and likes — gives you a head start in popularity that Facebook and Google will reward with additional traffic.

And readers end up with an endless supply of links to stuff that just seem to reaffirm what you're already hearing, instead of anything fresh that might give you the real, original news that might make a change in your life.

How do we get out of this rut? Fortunately, there are many ways that people can take action to drive society to reward work instead of weaseling. We'll talk about those in future posts, and I hope that you will subscribe or follow me to read them. But for now, we need to start by conceding a painful truth:

Flipping is ruining everything.